I just didn’t have the heart to leave Number Six in a global Village. I decided he needed retrieval.

“Each familiar person, place, or thing added lends itself to a reality guaranteed to bring about the desired results. He’ll fill in blanks himself, return to old haunts, renew friendships, and finally realize that, the whole world being The Village, his secrets are redundant. There is no place to escape to, there is no longer a need to protect all people. He’ll talk. It may take time, but he’ll talk. There’s no longer a reason not to.”

“Oh, I’m right. I’ve done this before and its never failed.” The man adjusted his glasses as though for emphasis. “Never!”

Number Six stood in the office of Number Two, facing his desk, looking out the window at the London skyline.

“I told you,” Number Two replied leisurely, “that there were going to be changes. And now you see those changes for yourself.”

“I see nothing but another failed stunt of yours to …” Number Six spoke through clinched teeth as Number Two cut him off in mid sentence.

“Come, come now, old boy, you’ve seen nothing yet,” and he pressed a button. The far wall glimmered, grew lighter, showed itself to be a large screen. “Name a place. Any place, your choice, and I’ll show you that things have changed.”

Number Two typed out a few letters on a keyboard resting on his desk. The screen blinked once and there was Rio in all its splendor. A panoramic view.

A few more key strokes and the Hotel Encontro appeared on screen.

“Why not pick a room?” Number Two waved his hand towards the screen.

“Ah, the room you occupied while investigating that messy Colombian drug cartel.” A few more key strokes and they were looking at the hotel room. The maid was currently cleaning. “Any particular angle or spot in the room you’d like to …”

“Yes, indeed. You see, we’ve expanded our, shall we say, franchise. Number Six,” Number Two leaned back in his chair, “you are free to go any where you desire. Go back to your old flat if you like. Pick up life as you knew it, where you left it. We’ll call on you when need be.”

A rather bewildered look on his face, Number Six stood there, stunned.

“We’ve grown, Number Six. We’ve outgrown The Village that you knew and so wanted to escape from,” Number Two leaned forward over the desk. “You see, Number Six, freedom is a myth. Your secrets? They no longer matter. You are no longer a protector of other people. World domination?” He laughed, slumping back into his chair as though fully at home and altogether comfortable. “Governments needn’t be overthrown, wars are a waste of resources, and there is only one thing necessary.”

“It’s all very simple, Number Six. Well placed people in key positions. Political offices, the military, and the corporate  world. All the world is a Village now, and with no one the wiser.”

“And absolutely no one will ever believe you.”

He sat in his usual spot, drinking his usual drink. The pub was packed. Many of the faces were familiar to him. He had come here fairly often and new several of the regulars. Everything was normal. Laughter, darts. And then he saw Leonard walk through the door. Leonard, who he had played darts with so many times. Leonard smiled, waved. Number Six smiled back, nodded, lifted his drink. It was all he could do to control his facial expression. Because now he knew, he understood.

“He’s in a pub that he knows well. Why would he react this way?” Number Two was looking at the screen, watching Number Six smile, drink.

The phone rang. The red one.

“Yes, sir. Certainly.” And Number Two held out the phone to the current Number Thirteen. “It’s for you.”

“Yes, what is it?” Number Thirteen spoke into the phone. “Yes, yes, I understand, but … NO! YOU listen. I do this MY way! You’ve put this in the hands of imbeciles in the past and failed repeatedly. If you want it done I’ll get it done, but you let ME take care of the project or you can bloody well come down here and do it yourself!” And, punching the “off” button, thrust the phone at Number Two.

“Of course I know!” Number Thirteen snapped. “And its high time someone stood up to him. He wants this done? Then he’ll learn patience and let me do it!” At that Thirteen looked towards where he knew the monitoring camera was located and made a slight bow.

Number Two was visibly shaking and looked as though he was about to faint. And he very nearly did.

They watched the screen together. Number Six was walking away from the pub, seemingly calm. “Blood pressure and pulse have returned to normal,” said the med tech.

“What happened in the pub? Why did he suddenly …” Number Two was watching the screen intently, questioning Number Thirteen.

“Some sort of glitch, perhaps with the equipment here. Its nothing to …” And Number Two cut him off in mid sentence.

“Glitch?! A glitch did you say? What do you think we’re doing here? Playing a cricket match? We can’t afford glitches!”

Number Thirteen turned and calmly walked the few feet separating them. His face was only inches from Number Two’s. “I,” he said in a low, even tone, “I won’t be bullied by him,” and he pointed to the red phone, “how do you think you’ll fare? I can walk out of this room and leave you in charge if you can do my job. Can you do my job?”

Number Six strolled calmly. He knew what needed to be done but hadn’t figured out yet how to do it. But an idea was forming.

“Brain waves are erratic.” The med tech adjusted dials, flipped a switch. Number Two and Number Thirteen, shoulder to shoulder, watched the screen. Number Six had stopped, a look of concentration on his face.

“What’s he doing? What’s going on in that mind of his?”

The scene on the screen began to change, to move.

The buildings, the walk, the street, everything around Number Six began to bend, rearrange.

“Do something!” Number Two yelled at Thirteen as he feverishly began adjusting the IV drip.

Number Six bolted upright, and tearing the IV from his arm, jerking the electrodes from his forehead, promptly fell back on the gurney while still struggling to get up.

“Restrain him!” Number Thirteen was holding him down as four orderly’s rushed to either side of Number Six.

“Take him to hospital, quickly! If any thing happens to him we’ll all …” Number Two was cut off by the sound of a phone. The red one. Looking at a ghostly white Number Thirteen he said coldly, “I believe that call will be for you.”

As the orderly’s rushed Number Six to hospital he could see, through the drug induced haze, the all to familiar buildings of The Village.

Later, in the hospital ward, Number Two stood next to his bed. The man had, by sheer will power, overcome the illusions they had so carefully constructed.

“I don’t suppose you’ll tell me how you knew it was all false?” Number Two raised an eyebrow in question.

“Why not?” Number Six smiled weakly. “I met an old friend of mine, Leonard, at the pub.”

“Leonard an I used to play darts together. Until his death four years ago.” 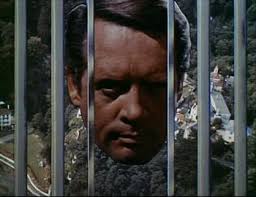 A Map of Your Village